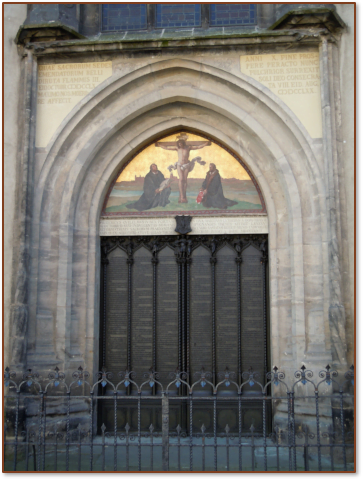 Cautionary Note from Brian – I am posting Luther’s theses here because I believe they are an edifying look into the history of the church, particularly when considering the topic of unity within the Body of Christ, versus the need to oppose false doctrine. Luther posted these 95 theses on the church door in Wittenberg in protest of the sale of “Papal Indulgences” by which sinners might supposedly purchase from the church relief from punishment in Purgatory.

Obviously, there are a number of points found in these 95 theses in which I believe (as would most Evangelicals) Luther was also in error, and un-Biblical in his teaching and his theology. In fact, Luther became increasingly heretical and anti-Semitic in his theology toward the end of his life, which tragically gave opportunity for evil men centuries later to rationalize and justify the Nazi program of exterminating Jews, in the name of Luther – and by extension in the Name of God!

Yet, the un-Biblical elements of Luther’s theology, are apparent even at the very beginning. For example, in examining these 95 theses, it becomes apparent that Luther continued to believe in the Catholic doctrine of Purgatory – a place of suffering in which repentant sinners must be punished and cleansed of their sins before they can enter into Heaven. This belief is clearly in direct opposition to the Biblical doctrine of salvation through faith in the atoning sacrifice of Jesus on the Cross, and nothing else.

Furthermore, it seems evident in the theses that Luther continues to believe in prayer to Mary and to the “saints,” when the Bible makes clear that these are mere human beings – sinners saved by grace alone, through faith alone, in Christ alone – and therefore wholly unworthy of worship or prayer which belong not to people or even to angels, but to God alone!

So please, beloved brother and sister, as you read these 95 theses, take them as a lesson in church history, and as entertainment, not as a lesson in Christian doctrine. If you desire to be schooled in that, turn rather to God’s Word itself, not the babbling of mere men like Luther.

But just imagine the pope’s outrage when he read how Luther had called him out about his little money-making “ministry” of selling indulgences! (;~)}}}