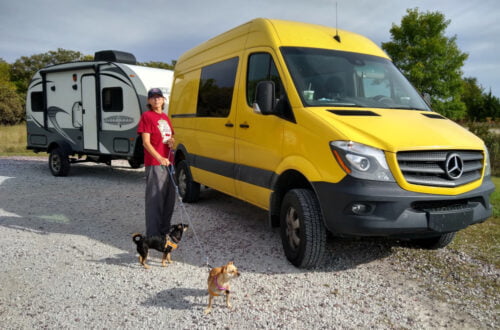 After reluctantly bidding farewell to our family in the Detroit metro area, we headed to Cleveland along the shore of Lake Erie and attended church at Parkside Church in Chagrin Falls, Ohio where we had the opportunity to meet and briefly speak with one of my favorite radio Bible teachers – Alistair Begg. After church we spent the evening with an old friend who was stationed with us at Pruem Air Station, Germany when we were newlyweds.

On the way to Cleveland, we stopped briefly along the shore of Lake Erie near Cedar Point just to look at the water and dip my hand in the last of the four Great Lakes we’ve visited this trip. It was a cool and quite breezy day, and the waves along the shoreline gave a foretaste of the coming winter. As you can see, Erie isn’t that deep blue color like Superior and the northern shores of Michigan and Huron. Maybe it was just the disturbance of the sediments by the heavy waves, or maybe Lake Erie is this dull gray color all the time. I may never know.

After quickly settling into our campsite southeast of Cleveland, we headed to Parkside Church in Chagrin Falls, Ohio for the Sunday evening service. The worship time was a wonderful mixture of contemporary worship songs and traditional hymns. The teaching for the evening service was unusual. Instead of a traditional Bible study such as I have heard Alistair Begg preach for years on his radio program Truth for Life, Alistair came with a list of questions he had received from his congregation and answered them based on his understanding of the Word of God. One of the questions asked whether Alistair would state from the pulpit that people should vote in the upcoming election and that they should vote based on policies and issues from a Biblical perspective rather than vote for personalities. His answer – “Yes.” He did go on to elaborate a little bit on that, saying that regardless of the outcome of the election, there will in fact be life after November 3rd. He also reminded the congregation that God remains on His throne directing the affairs of Earth, and that we are called to obey the worldly authorities whom God has appointed. He reminded us that King David refused to take matters into his own hands in his decade-long struggle with King Saul because he recognized Saul as God’s anointed, and even though God had already removed the kingdom from Saul, David refused to kill Saul even when he had opportunity and justification – preferring instead to allow God to deal with Saul in His own way and His own time. Alistair exhorted us to obey the authorities God has appointed despite our personal beliefs unless those authorities call on us to do something that is clearly contrary to the Word of God. Of course, Alistair’s reference text in this admonition was Jesus’ response to the Pharisees who had asked Him whether it was right to pay taxes to Rome – “Render therefore to Caesar the things that are Caesar’s, and to God the things that are God’s.”

After church, we caught up with an old friend from our Air Force days whom we haven’t seen since we left Pruem Air Station in 1985. We spent such an enjoyable time together until long after midnight, I entirely forgot to get a photo of the three of us together.