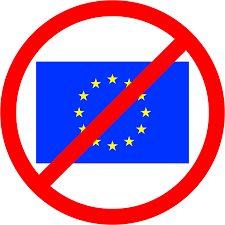 A German-American acquaintance of mine remarked to a relation of mine a few weeks ago upon return to America from a visit home to Germany that America is like a third-world toilet by comparison. I’m not one to fly off the handle when people disparage America. We’ve certainly got our problems just like everyone else. Furthermore, having lived in Germany for a fair proportion of my sixty-odd years on the planet, I am by no means a Germany basher, although I’m not the fan of the Bundesrepublik I once was prior to reunification and the advent of the European Union. But hearing about that off-hand remark put me on a slow boil that has finally bubbled over into this BriRant.

Now I’m certainly not a “my country right or wrong” guy either, and I’m not so sure that America really needs to be made great again. But I take exception, as we approach the 75th anniversary of the D-day landings to the remarks frequently uttered by some politicians and other inconsequential celebrities that America was never great. Those who utter such foolishness are ignorant of history. I would suggest they might consider a trip to the Holocaust Museum, or better yet a personal interview with one of the ever-dwindling number of Nazi concentration camp survivors liberated by American GIs. Barring that, perhaps a Christmas visit to Bastogne, Belgium would certainly serve well as a reminder that there are people in the world even yet who do believe that America has been, and still is great, if not the beacon of liberty and prosperity she once was. Of course America’s history isn’t exactly pristine, but neither is… ahem… Germany’s, if I may dare say so.

Furthermore, having visited a fair selection of third-world countries in the service of America, I can avow and attest that the person in question doesn’t have the slightest clue about what truly constitutes a “third-world toilet.” I might suggest a ministry trip to one of them, or perhaps a vacation in somewhere like Cuba, or Syria, or maybe Colombia, or The Democratic Republic of Congo for a true taste of what life outside America, and the so-called “great western democracies” is really like. Indeed, if I ran this zoo, I would ordain that before Americans are allowed to vote in our elections, they would first be required to serve in some capacity for six months or so in one of these “vacation spots.” That would give them a better perspective on exactly how great America truly is, and a desire to help preserve our freedoms and way of life.

If Germany is so much less like a third-world toilet than America, why not move back there? What is it that has kept you living in America for so long? Why not trade the opportunity you enjoy here in America to run a successful small business largely free from burdensome regulation for the stifling dictatorship of EU rules that control practically every aspect of the lives of EU citizens? As you drive your truck around from work site to work site, consider how much better it would be to pay twice as much for your diesel fuel? And don’t forget how much nicer it would be to pay the roughly $2,000 it will take to get a license to drive your truck in the first place, rather than less than $50 as you would in any state in America. When you stop along the way for a cool drink, wouldn’t you much rather pay the current 19% Value Added Tax in Germany than the 8% sales tax here in the third-world toilet which is the good ol’ USA? Then at the end of the year, as you’re writing your business expenses and home mortgage interest off of your income taxes think about how much better it would be to pay the average income tax rate German citizens pay of 42% than to pay the average of roughly 30% American’s pay into federal and state income tax, social security and medicare. At least 10% of the German income tax doesn’t go right into the coffers of the Roman Catholic church as it once did, unless of course you happen to be a church member.

After a hard day’s work, why not relax by doing a little fishing? But don’t forget that to get a license to fish anywhere in the Bundesrepublik, you’ll need to take a mandatory course and pass a written examination that proves you understand the fishing rules and regulations. It’s going to cost you about $200 to obtain the license, but afterward the annual renewal will only cost about $20 – roughly the same as in the USA. But once you have your fishing license you’ll have to pay the owner of the water (either the state or a private owner) on a daily, weekly, or monthly basis to actually do any fishing. If you like to hunt, all I can say is you need to do it somewhere other than Germany. It’s going to take years for you to obtain the required license, after passing the inevitable written examination. But even if you get a hunting license, in order to obtain a firearm for your hunting you’re going to have to navigate some of the most restrictive gun ownership laws in the world. And guess what. You’re going to need to pass yet another written examination, and pony up another pile of cash for the mandatory training and insurance.

But hey. Personal freedoms and cost of living are only two considerations in evaluating the quality of life. In exchange for all those taxes, German citizens garner multiple social benefits. In exchange for all that regulation, Germany offers its citizens order, which is after all – according to the words of an ancient German Sprichtwort – equivalent to life itself. It is worth paying a little extra and laboring under a slightly more stringent set of regulations to live in a well-ordered civil society with cultural events like the ubiquitous crowds of drunken teenagers on the streets and subways Friday and Saturday evenings, and the “holiday” rampages of rape gangs in the Köln, Berlin, and München U-bahns a couple of years back perpetrated by men brought into Germany under its extremely liberal immigration policy for people entering the country from third-world toilets like America.

Of course, Germany doesn’t hold a monopoly on such social atrocities. God knows that America has more than its fair share of violent crime too. But by comparison to places like Mexico, Colombia, Sudan, etc. both America and Germany are downright genteel even with their occasional outbreaks of savagery – certainly not even in the same league with the real “third-world toilets.”